The Charles Darwin Tour along the coast of Patagonia

For more than 20 years we have been travelling along the coast of Patagonia to visit the Southern Right Whales in their breeding and calving grounds. Every year we return to this fascinating setting.

This tour is a journey into the breath-taking wildlife of the Patagonian coast. Besides whales and dolphins, sea lions, elephant seals and the animals of the Pampa you encounter Magellanic penguins, Southern Rockhopper penguins, Red Legged cormorants, albatrosses and many other inhabitants of the Argentinian Atlantic coast. You move off the beaten tourist tracks and travel through beautiful landscapes. 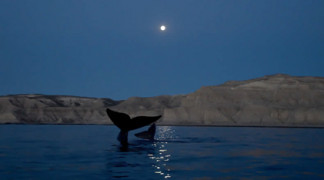 Reception at the airport of Trelew. In small private buses the journey continues to Puerto Pirámides for approximately two hours. You stay at The Paradise Hostería. The small, cosy rooms all have modern bathrooms with hot and cold running water. There is a restaurant in the hotel where breakfast is also served. There, you can see the whales jumping in Golfo Nuevo.

In the video you see those animals which you can meet at Península Valdés, recorded in October 2014. 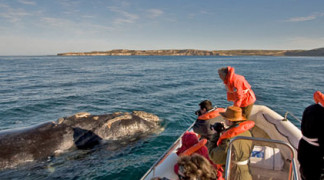 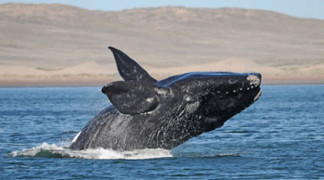 Day 2-8: The whales of the Península Valdés

During the following five days you will do whale watching at the ocean. The crew on the boat is able to interpret the different behaviours of the animals such as mating, feeding, breaching, fluking, but also the socialisation between females and their calves. The bays around Puerto Pirámides belong to the best places in the world to observe large whales close-by. Southern Right Whales are known to be very interactive and curious about people and boats which is why they usually get quite close to the boats. Besides the whales, dolphins are a further focus of the tour. With a little bit of luck you encounter groups of Dusky dolphins, the most common of the dolphins that visit these waters. When anchovies come to spawn in the gulf, the Dusky dolphins often gather in large groups for hunting, often accompanied by hundreds of sea birds, seals and penguins. Being able to observe such a “feeding frenzy” is an amazing opportunity, which we usually only get to see in wildlife documentaries. At one day a day trip around the Península Valdés is planned. Wildlife that can be encountered on the beaches and along the coast includes elephant seals and a lot of sea birds and animals of the Pampa. Though guanacos, foxes and maras (pampa rabbits) may be your companions. 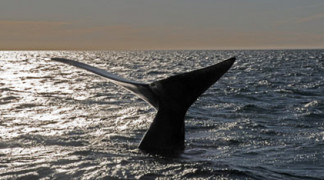 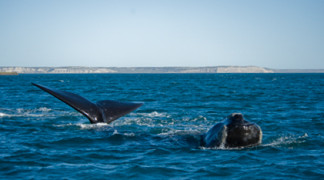 Day 9: Continuing to the South

Approximately 450 km drive at the Argentinian highway to the protected area of Sarmiento. This area has a petrified forest. It is located just 30 km away to the South of Sarmiento accessed through a gravel road. This provincial natural monument is a forest from the Cenozoic Era. That means it is approximately 65 million years old.

These petrified trees, witnesses of Prehistory, make up an indescribable beauty given by the hardness of the rock, the color of the different geologic strata and the heavy silence of respect for nature.

Its petrified logs are part of the result of the effect of millions of years on the wood. At the beginning of the Tertiary Era, the Andes Mountain Range rose and thus, prevented the humidity from the Pacific from getting through. At the same time, eruptions were produced and the ash deposits spread around giving way to a slow process of transformation of these logs into stone.

There are plenty of logs in the volcanic sediments of its soil. Some of them have a significant size and it has been established that they were originated in the Lower Tertiary Period (Paleocene). On the way you stop in Trelew to visit the Museum of Paleontology “Egidio Feruglio”. In the afternoon the exploration of the picturesque fishing town Camarones is planned.

We spend the night in basic local guest houses. 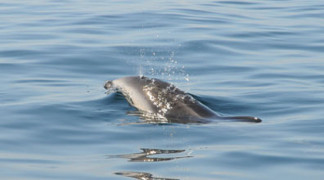 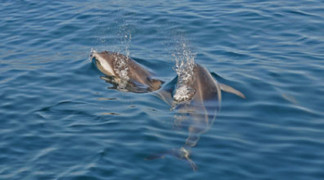 Day 10: Visit of the Park and moving south

In the early morning we list the park to take pictures. After we will drive more 550 km southwards. There, Darwin moored his ship, the HMS Beagle, on 23rd December 1833. In the estuary of the Ría Deseado he discovered a unique biodiversity which encouraged him to stay in order to continue his studies. After arriving in Puerto Deseado, check-in at the comfortable Cabañas Las Nubes which are above the river mouth and are the starting point of the excursions. Each cabaña has two bedrooms, a large living room, a kitchen and a bathroom.

Day 11: On the course of Ría Deseado

Boat expedition to the shallow river. There you have the opportunity to observe many sea birds and the Commerson’s Dolphins, also called Skunk or Panda Dolphins due to their black and white colourings. With a size of about one meter they are one of the smallest species among whales and dolphins in the world and can only be found in two geographically separate areas in the Southern Hemisphere. As of late there have also been spotted Chilean Dolphins in the river. On the way you stop at Bird Island where colonies of sea gulls, cormorants and penguins breed. 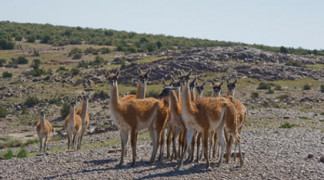 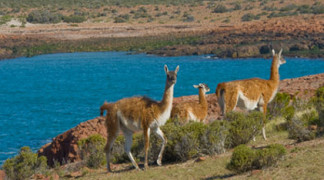 Day 12: The Island of Rockhopper penguins

You visit of the Island of Penguins which is about 20 km away from the coast and which accommodates the northernmost and only accessible colony of  Rockhopper penguins. Apart from around 60,000 Magellanic penguins there live also elephant seals, sea lions, skuas, cormorants, Commerson’s and Peale’s dolphins. Bird lovers will be happy, because until now there could be observed 136 different species. Especially the Gray cormorant with its steel blue eyes is of outstanding beauty. Those rare animals nest on the cliffs of the river bed.

On the Island of Penguins there are also the remains of a 18th century sea lion factory and the centennial lighthouse. Therefore the island is an ideal location for photographers to catch the unique atmosphere. Each year only 200 tourists are allowed to visit the island. 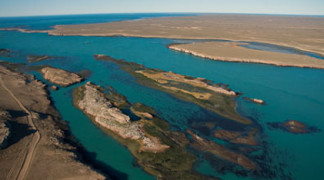 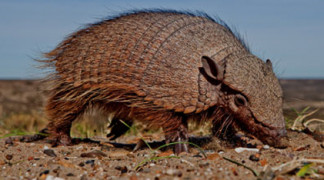 Today you drive and hike along the course of the river in order to observe birds such as Red-legged cormorants, Grey cormorants, Rock cormorants, flamingos, night herons and different raptors. The rest of the day is free at leisure. Optionally, you can go on more boat trips or visit an “Estancia”, a cattle ranch. 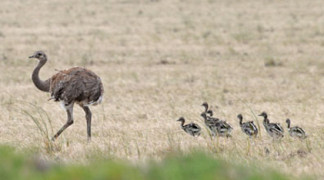 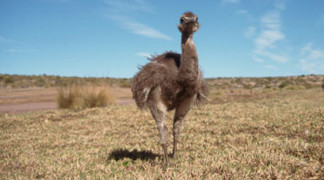 Today you leave the paradise. Transfer to the airport in the early morning. 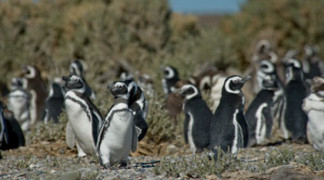 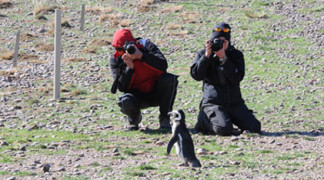 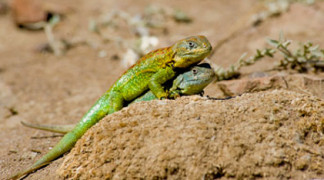 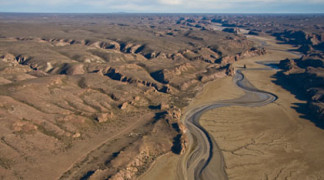